There and back again

Last weekend the Marquis family gathered in Edmundston, New Brunswick for my other-in-law's 90th birthday party. It was a whirlwind visit to say the least!

Our son picked me up on Thursday evening and we drove through freezing rain to Ottawa arriving near midnight. We stayed at our daughter's overnight and then hitched a ride with her and her husband for the next leg of the journey. I woke around 3 a.m. on Friday to the sound of freezing rain. It had finally caught up with us.

We were back on the road again at 7 and when we stopped for gas and coffee just outside Quebec City, the rain had all but stopped. A lady stopped in the doorway of 'Tim's' in shock to ask us from where we had driven. When we turned to see what had caught her attention we saw that the front of the vehicle was so thick with ice that the licence plate was no longer visible! We cleared what we could of the ice from the headlights, the front of the car and the roof rack and with coffee in had struck out for the rest of the journey. I just wish I could have reached my camera to capture that poor car.

Mrs. Marquis' family and friends gathered for a dinner and then returned to the hotel afterwards for coffee and cake. She was so happy  to have us all there. And it had been years since we had all managed to get together. Birthdays are such happy events for family gatherings.


Next morning the four of us set off for home once again in the snow. It ceased once we passed Lévis, Quebec. We arrived back in the Ottawa area by dinner time where the sun was shining and there was no snow in sight. The remainder of the trip was uneventful. Paul and I were up and on the road again to Newmarket by 8 a.m. Monday morning.


The sun was shining and it was lovely and warm when we arrived in Newmarket just after noon. Paul had another hour and a half drive to reach his home. Bob stayed on with his mom for a few more days to ease the letdown after all the excitement.

So these wonderful photos were waiting for me  when I got back to business. My good buddy has made a jumper of printed pinwale corduroy for her little granddaughter who lives in Australia. 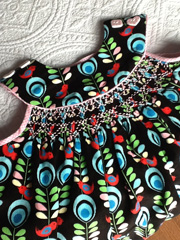 She always does such neat things with buttons and this jumper from my new Infant Snowdrift pattern is no exception. She also used a fine coordinating mini gingham for the armhole binding and the mini piping. You can just see them in the second photo. I surely hope she gets a photo of this sweet little gal wearing her jumper and sends it on!

You can find this adorable pattern on my web site, www.amberlane.ca . Go to the Atelier and then to Children's Patterns. If you click on pattern cover you will see some photos of garments made from the pattern.

If you go to Pleater Companions you will see that we have new pricing on the ComPleater Boxes and a new product, Pleater Rods. Read all about them; I think these rods are brilliant. We think these items will make your pleating life easier.

While you are visiting the web site check out the Other Designers. I carry A Garden of Smocking Designs, Emma's Gown and Grace L. Knott patterns, books and dots.

So until next time, keep stitching!
Posted by Judith Marquis at Tuesday, April 23, 2013 No comments: