I seldom sew for others but a special friend asked me to make the flower girl dresses for her daughter's wedding this September. So you know what I've been working on all summer! They had to be as perfect as possible and many a night in bed I went over the construction in my mind working out the order of construction.
The bride saw dresses in an old Australian Smocking and Embroidery magazine - sleeveless, smocked from shoulder to waist and a huge full skirt with three layers of netting on top of the skirt. Oh, yes it was all done in silk dupionni.
When we discussed the fabrics I said yes to the silk dupionni - a fabulous choice but in place of the layers of netting, why not one layer of silk organza - a much classier choice. And I knew the store I was sending mom to would have it to match.
The children were ages 2 and 5. The gowns were to be full length and both girls were long waisted and likely to grow before the wedding. All big considerations.

To make this long story short I will skip to the gathering of the skirts.
Both the fabrics were 60" wide, thank goodness, so I didn't have to cut either to join multiple panels. Dupionni ravels terribly and after pulling threads to make sure everything was perfectly on straight grain, with the selvedges removed, all edges had to be overcast to maintain the proper size. I prepared each layer of the skirt - side seams and plackets then layered them to gather to the bodice. The ratio was at least 4 to 1 and it was going to be quite a job to get it all gathered in to fit the bodice.

I needed something very strong and regular thread was out of the question. I considered using a cord and zig zaging over it as I've read about many times before. But I wanted much more control. Then a thought struck me - dental floss! I've used it forever for the tops and bottoms of Christmas balls. It doesn't break no matter how hard you pull on it and better still, I had a package of unwaxed floss in the notions drawer.

So I wound it on a separate bobbin and loaded it into my 'black latch" bobbin case just in case I had to fool around with the tension. Then did a test to see if I could gather it all up as I planned. All worked perfectly.

I set the machine for stitch length of 3 and the upper tension at 4 (normal on this machine is 5). The seam allowance was at 3/8" so three rows of gathering stitching were run: the first at 1/8" from the edge, second at 1/4" and the third at 1/2". When everything was gathered up it would be easy to stitch at 3/8" - it would be right in the middle of the second and third row of gathers!

The skirt sections were each divided into four as were the bodice sections, and then into eight. To go further was going to be too tight to get a finger in for manipulation. Fortunately the silk held a finger-pressed fold so that the centre of each section found, pressed and matched up with a pin.
I learned this technique in tailoring (a different lifetime ago when I was at Ryerson.). We learned to set in a wool suit jacket sleeve with pins only, by breaking down the space this way until you couldn't fit another pin in (no gathering threads!) and stitching very carefully. When we were  finished there wouldn't be a single pucker and a good bath of steam finished the job. Well, this was silk and no amount of steam would touch this dress!

Next was to pull up the gathering threads, all three, at the same time. This was easy at first but got harder the further I went. It was essential to work from each end to the center. Almost no adjustment was necessary when completed as the fabric gathered in perfectly. Next step was stitching the waist seam.

When the stitching was done, the gathering thread in the skirt was removed - with great care. I left the top two rows in place to keep the fullness under control in the seam allowance.


The two skirt layers were perfect on the right side of the dress. To make them look fuller, it was easy to separate and fluff them up by the waist. They looked just a full as all those layers of netting!

Hope this has inspired you to make a princess dress for someone special.


Posted by Judith Marquis at Thursday, August 30, 2012 No comments:

Babies are 'popping up' all over!

New babies call for gifts and if you haven't planned ahead and really want to give something hand made these take only an evening of hand work to create. They are so cute tied to a store-bought gift in place of a bow.

Someone I know is pregnant and although rumor has it she is having a wee baby girl, I really prefer to wait and be sure. So I went shopping for some baby socks - the kind with the ribbed, turn-down cuff. These are perfect for decorating and I can make a little dress later to match. If she does by chance have a boy the flowers can be cut off should they offend daddy. 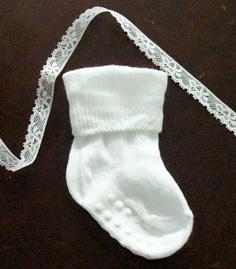 So, I dug around in my lace stash and found some narrow edging that would do the trick.
You will need twice the stretched out length of the cuff edge and just enough for joining the ends. 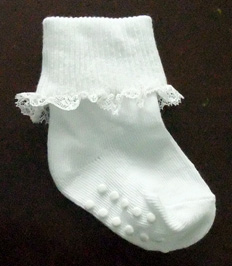 With a needle and length of thread, I stretched out the cuff as far as it would go over my index finger and placed the lace face down on the cuff edge. There is no need to pre-gather the lace as when the cuff relaxes the lace will be gathered up.

Whip the edges together - just catching the lace heading and the elastic edge. Keep the stitches spaced no further that an eighth of an inch apart. It was a bit awkward at first but once I got it going, it was much easier to handle.

It won't take but a few minutes to do this by hand but you could also do it on your sewing machine. Just be sure that you keep the cuff stretched out as far as it will go while you zig zag the lace onto it.

Whip the ends together to complete the job.

Now if you want to add a bit more, you can use the courses of the knit (the ribs) as pleats and smock your way around. You will want to use waves or very stretchy stitches like Van Dyke. Use your fading marker to draw a couple of lines on the ribs to represent gathering threads if you have trouble visualizing uniform spacing. You can add a few little figures of stacked cables on the side or front. I used little flowers. 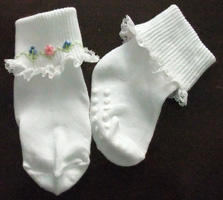 Job done - all while I watched the closing ceremonies of the Olympics!

Posted by Judith Marquis at Monday, August 13, 2012 No comments: