Taking license to be creative...

Well, here we are coming up to 11 weeks with this broken leg! But I'm coping and now have a brace which allows me to walk without crutches or relying on the wheel chair. Hurray!  Just wanted to let you know that although things have been rather hectic around here, I have been teaching some private classes while recuperating.

So one of my student friends had a question about choosing a design plate and colours for her smocking.

Her fabric was the most adorable white Swiss Pima cotton pinwale pique with bumble bees in black and sunshine yellow. It pleated up nicely without huge globs of print and her choice of pattern was the Pinafore and Sundress that I had revised for Grace Knott. Marian had a design plate in mind but needed to make a couple of changes to make it fit the depth of pleating. 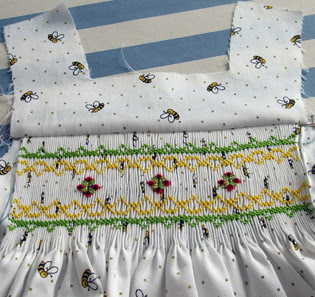 The first concern was colour.
She was hesitant to smock with black so chose a yellow to match the yellow of the print. Good choice!
For her second colour, I suggested a lime or bright yellow/green to make the stitching look fresh.
The design plate called for flower accents and Marian had her heart set on bright red which worked beautifully. But the flowers needed to 'pop' so she added black French knots - large enough to make them visible. Now the flowers had 'centres' and the black also gave 'focus' to the bouquets.

So here you can see the finished smocking for the front of the sundress. A row of smocking was added at the top and bottom of the design which was not part of the original design plate. More about this below.

Marian's next question was, 'Does the back always have to match the front?'  Of course not. In fact, if the child is old enough to start dressing herself, having  variation of the front on the back, can make it easier for her to get her pinafore on the right way!

So if she was going to omit the flowers, how was she to fill the space?

Here is a close up of the top of the design plate as it was given originally.
I suggested that she take one of the rows from the design (2 step half space wave/cable combination) and add it above and below the cable row to give a picot edge to the design. As you can see above and below that worked out nicely. I am not a fan of smocking a straight row of cable, stem or outline at the top of a design. Too often it doesn't line up evenly with the seam (or piping) when the yoke or binding is attached. When she took that one row or smocking and mirror imaged it, it to created diamonds. These fit in so perfectly with the original design. Marian centred the diamonds vertically and off-set them between the borders. Low and behold she had a whole new design simply by making use of a single row from the original design.

Could she have gone further? Yes, she could have by adding an accent in every other diamond in red or black but sometimes it is better to stop before you go too far. She wanted the sundress  to be light and spring-like and besides it was only a size two. Better to keep things simple. 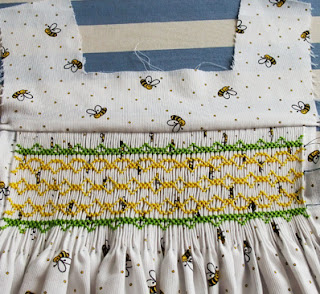 Lastly here is the back with the yoke attached and ready for final assembly.

I hope this has inspired you to try taking license with a design you are stitching to create a new custom look for a garment you are making!

Posted by Judith Marquis at Wednesday, May 30, 2012 No comments: